Immigration Director Says Miguna Miguna is Not a Kenyan Citizen 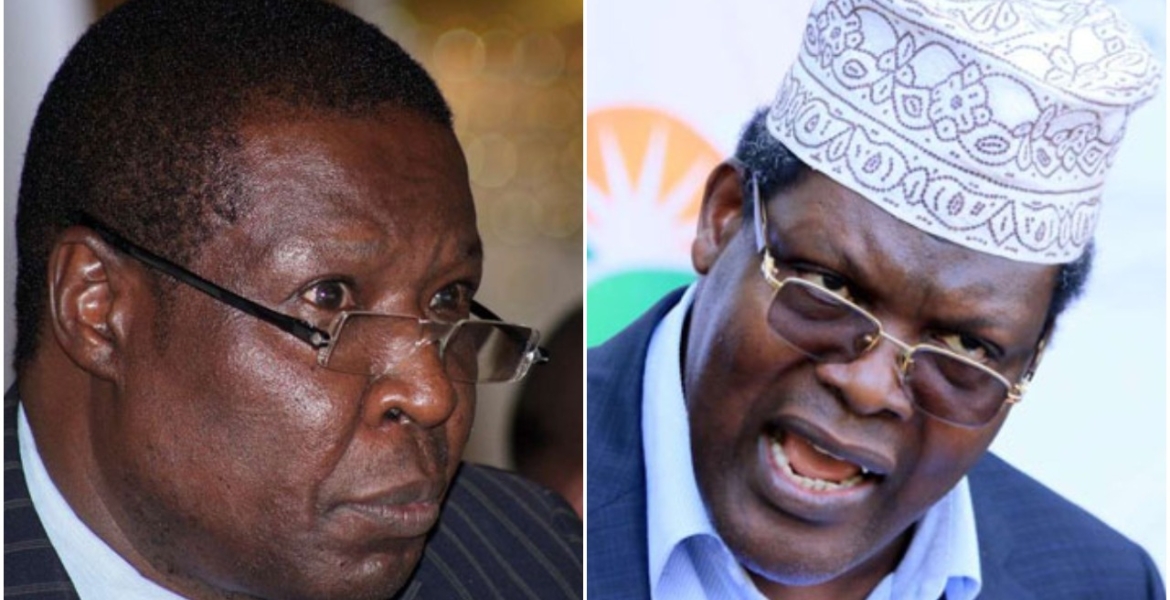 Immigration Director-General Alexander Muteshi has reportedly said that lawyer Miguna Miguna is not a Kenyan citizen.

Muteshi is said to have told Miguna’s attorney Nelson Havi that the political activist lost his Kenyan citizen upon acquiring a Canadian passport.

Havi, who is the president of the Law Society of Kenya (LSK), was at Muteshi’s office on Wednesday to serve him with a court order that directed Miguna be issued an emergency travel document to allow him to travel to Kenya.

Havi claims the immigration director told him that Miguna, a dual citizen of Kenya and Canada, will have to reapply for a Kenyan passport.

Havi claims Muteshi physically assaulted him in his office as he served him the court order.

A video he shared on Twitter shows Muteshi at his desk talking to Havi when he notices the LSK president recording their conversation and stands up to confront him. The short footage does not capture any form of physical violence.

Miguna, who was deported to Canada in 2018, is stuck in Germany after he was barred from boarding a Nairobi-bound France Air flight last week over a red alert allegedly issued by the Kenyan government.

In 2018, Justice Chacha Mwita ruled that Miguna is a Kenyan citizen and that his birthright is not affected by him holding a Canadian passport.  He added that Miguna’s rights were violated when he was deported and awarded Sh7 million as compensation.

Someone tell the Government of Kenya, you don’t lose your citizenship.

You renounce it by signing legal paperwork.

It’s not an imaginary process.

They need to produce the paperwork Miguna signed saying he has renounced his citizenship or they should just shut up!

@Guesty, this is really simple. Before 2010, the old constitution was the document that determined what happened if you swore allegiance to another country and in his case it was to his Queen. You automatically lost your citizenship to Kenya and no certificates were issued to that effect. This was all there was to it and he knows it. Many of us went through it and followed the laws of the new constitution to regain our citizenship. It was a minor inconvenience but it's what Kenyans in Kenya decided. What makes this man so special that he won't abide by the new constitution? Look up the old and new constitutions, verify when MigunaX2 swore allegiance to Queen Elizabeth and figure out what needs to be done. His old passport was acquired illegally since he never followed the law too reacquire his citizenship. He is flying as a Canadian and a subject of the queen otherwise he would have already been deported from Germany.

You are stating utter nonsense..You know exactly what they are doing to Miguna don't just sit there typing thinking that you know the Kenyan constitution better than the rest of us! You know as well as I know that the USELESS Kenyan Government would still deny Miguna even if he applied for his Kenyan passport today. I mean how low can these scumbags go? Wacha leo tunaongea ya Miguna, kesho itakuwa yakko. Regardless of the person in question, the Kenyan government can screw any of us up, any day! So get off your high horse and support a fellow Diasporan!

At no point do I state I know the Kenya Constitution better than anyone. But I am familiar with this portion cause it affected me directly. Outside of lying, bribery or a combination of both, I had no choice but to reapply for reinstatement. I will not support a diasporan who is mostly full of hot air and a desire for the spotlight above all else. I didn't and still don't agree with that law but it is the law of Kenya. I'm not better than my fellow diasporans and neither is MigunaX2. Why does he get a pass the rest of us did not? Kenya is full of"leaders" who ignore the law was it suits them. Are you suggesting we add diasporans like MigunaX2 to that shameful list just because we are diasporans? Do you believe we are better than Kenyans in the 254 and should ignore the Constitution they passed just because we live majuu?

Miguna Miguna is merely sportsmanship for political gains! He is a useless man who doesn’t mean well for kenya!

These bunch of diaspora hooligans want to gain notoriety by creating side shows and drama to gain political clout in kenya. They are not fighting to make life better in kenya! They are fighting for their stomaches - as simple as that mere fact!

But I blame Kenyans for their appetite for the hullabaloo created by these diaspora and local clowns in the name of politicians and lawyers. They are dividing kenya right in the middle for their own interests while Kenyans watch in amazement!

As a matter of facts ordinary Kenyans ought to take up arms to clean these idiots out!

You don’t blindly support an idiot simply because he is one of your diaspora idiots! You got a lot of idiots like you there in the diaspora to a point you folks have lost credibility here in Kenya!

You all seem to live in your own fuzzy world of stupidity and ignorance! We want peace here in kenya. We don’t want thugs who studied law to come here to disrupt our daily lives!

Sad and very sad. How do you deny a natural born Kenyan his birth given right? Diaspora, wake up now.

Exactly Exactly follow the due process of getting back you citizenship.I followed the same way when I dropped my usa passport

When USA dropped u niga. Say that.

Mkenya Halisi, the US does not drop Citizenship. The truth is that you were never a Citizen of the US, and for some reason, you were deported to Kenya.

This is the deportee @halisi who normally ask Diaspora Kenyans to send him money! Beware of a con folks! He lives near Sugoi where Ruto taught them to steal.

Does Muteshi know his god,Uhuru will be out of office in eight month’s time?Who will protect him escape assault charges ones Uhuru is gone as neither cannibal Raila nor jambazi Ruto wil help him?Does he own Kenya?Who is he to allow D M or any other Kenyan permission to be Kenyan?Does he know there are several governors,senators/MPs and even ministers(among the 700) who are US citizens?

Nice! Folks need to put their stupid emotions on the this conman Miguna Miguna! How many times does he need to hear that he is not a citizen of Kenya? The guy is a Canadian citizen and that’s where the bucks stop!

I hope Havi’s front teeth got knocked out by Muteshi for acting stupid! I’m sick and tired of these idiotic lawyers thinking they are above the law!

Why can't this noisemaker just get travelling docs or Kenyan pp from the Kenyan embassy in Canada??

Why is this case so special reacquiring Kenyan citizenship, is a matter of showing required documents and paying whatever fee is required.
Am sure there are better stories than investigating the companies ripping off the Kenyans in the diaspora so that people will know and avoid getting ripped off. Start with FEP holdings.

I agree Lettas Developers, Banda or Mahiga all these companies selling off plan houses. Since 2018 my house is still being built urgggh!!

Wezi ni wale wale like @halisi! Don’t look far, and then coupled with politicians who have made conmanship an art of making free money in itself!

Okay, now I see these connectiins. My advice to bro Miguna, use your Canadian passport, come to kenya then reapply and we see if they will deny you based on what grounds????.

Well stated here! Miguna, in the old (before 2010) constitution, if you applied for another country’s citizenship, even if you are a Kenyan by birth, by default, you lost your Kenyan citizenship and to regain it, you must reapply to regain your Kenyan citizenship. Miguna applied for Canadian citizenship when the old constitution was still in effect. Reapplying for a ‘lost’ citizenship is the simplest straight forward way all of us follow. Why you want it differently is just a sympathetic cheap publicity, a narrative to stay relevant. STOP your silly stunts. I am even confused by the so called awards or favorable judgements from some of these Kenyan judges who know exactly what the law says. SAD!

This is the guy who should be jailed for contempt. High court has addressed this and he did not appeal the ruling then.

All Kenyans have same rights and privileges as per the constitution, though we know it doesn't always work that way 100%. But hey, thus is simple. Miguna x2 should do like all Kenyans in the diaspora did to regain their citizenship. Again, this is nowhere near Rocket Science!

Miguna just travel to Uganda then connect from there, Panya routes are many

THIS DISUNITY I SEE AMONGST KENYANS IN THE DIASPORA IS DISGUSTING! Leo ni Miguna Kesho ni Wewe! GoK loves this that's why they have no agenda for Kenyans in the diaspora. Wengine you carried your Ukabila with you accross the ocean with the same stupid and backward thinking mentality! It is very unfortunate! No wonder diaspora remittances are in billions but Kenyans in the Diaspora havr no say about how that money is spent. Mko tu majuu kama watumwa. Next they will be taking your properties and land as you watch. They have already started killing some as soon as you identify as diaspora. Most Diasporans do not even visit their homes or villages because of fear or their own stupid notions. You wanna make a big change in the diaspora, then it should begin with changes in government policies! You know very well that even if Miguna re-applied for his Kenyan passport they will still be taking him round in circles! It's all fun and entertainment now until the same shit drops on your door!