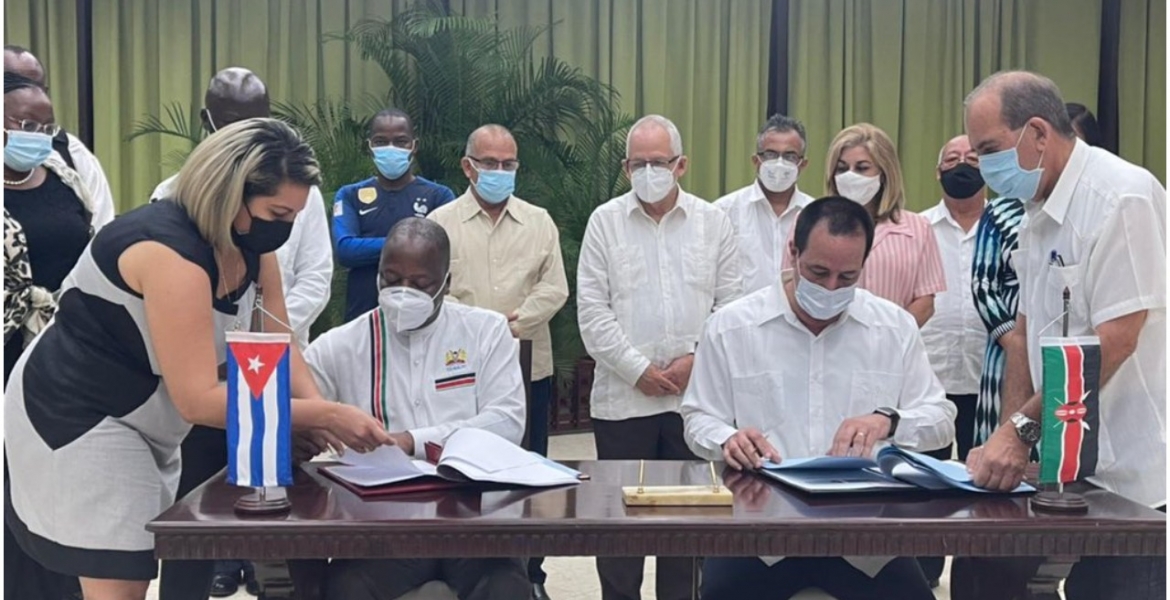 101 more specialist doctors from Cuba are set to arrive in Kenya as part of a medical exchange program between the two countries.

Kagwe is currently on a three-week visit to the Caribbean nation to strengthen the partnership between the two countries in a bid to improve Kenya’s primary healthcare.

He is also expected to pick lessons on the country’s outstanding primary healthcare delivery model, and its highly successful program to combat malaria.

Kagwe's visit to the island nation comes at a time when the government is seeking to improve Kenya’s primary healthcare system as a catalyst to achieving universal healthcare, one of President Kenyatta’s big four agenda.

In June 2018, 100 Cuban medics came to work in Kenya under an agreement between the two countries that also saw 50 Kenyan doctors travel to Cuba to receive specialized training, especially on family medicine.

The medics’ contract was renewed in June last year following the expiry of their initial two-year deal.

The team underwent induction at the Government School of Science for one month before being deployed to each of the 47 counties.

Ouru importer in chief. Why import doctors and export maids to Saudi? Billions paid to Cuba could get more employment to Kenyans.

So kenya is the only country that will import Doctors that get paid way more than they would have been paid in their countries and at the same time have a problem paying local Doctors. In return Kenya is exporting house helps...Mhhh its a shame to live in a country with failed system.
God help us

Most welcome Cuban doctors. Kenyan doctors may not like you, but for the most poor and vulnerable, there are tired of these greedy, arrogant and reckless Kenyan doctors. Their lack of empathy is appalling. As serial silent killers of poor Kenyans, where misdiagnoses is a common phenomenon, eighty percent of Kenyan doctors should be languishing in jail for first, second and third degree murder, premeditated murder, first to third manslaughter, knowingly and with intent to steal, steal drugs intended to save the lives of gullible Kenyans, look the other way along hospital corridors as as they watch the dying writhe in pain.
A poor lady with liver disease had Kenyan doctors drill the liver looking for what? By the time she arrived in India for specialized treatment, the liver had rotted to an extent that Indian doctors could not even touch her. She returned back home to DIE. Majority of patients going for treatment in India have, through negligence, being misdiagnosed, as their doctors dilly-dallying by knowingly making money treating the wrong ailments as time goes by. It is only when they have milked enough from a patient for months that they refer a patient to a specialist for a different ailment. How can they do that? After having been trained for free using public resources, they end up looking down at fellow like they are a piece of gabbages. No wonder most of them look sickly malnourished due to millions of complaints lodged against them. May they follow the same route as the patients they mistreat.

Very well said Mjuaji. Hapo umewaka sana. Thanks for your wisdom. Unfortunately many here are under the illusion that healthcare in Kenya is OK.Its not. Period. Also these Cubans are giving med services for FREE. Get it. FREE. Part of their global ambassador prog. Some nations pay them, but Kenya is not one. BTW, You cant whine when you get FREE docs, yet stay silent when KEMSA steals your tax funds, COVID billionares are made and health sector is alloted peanuts compared to Govt budgets. I think this is the REAL reason Uhuru had to allow hawa communist docs coz theres no money left.Also lets him hit back at the dccs on strike.
As stated, this is the capitalist corruption fruits we reaping now. Medical care is not cheap even with no corruption. Throw in corruption and incompetence its a nightmare. Those cases mentioned here of misdiagnosis assumes one has the money. Imaging those with no money or access now? Its a life and death for many when it doesnt need to be.
We need these Docs esp with our exploding pop for the next 15 years.

Do we have enough doctors? Of course but underqualified, greedy, reckless and dangerous. There fixed if for you!

@ Kora Kanini, No we dont have enough doctors. Not even close. WHO recommends at least 2.5 medical staff( adoctor, anurse...)per 1000 persons. Data collected thus far shows that Kenya has .2 per 1000 "patients".
Cuba has the highest per 1000"patients",at 8 doctors.
In fact the whole of Africa is badly in need of doctors.And nurses, I might add.

Cuba leading coz the doctor and makanga earn same 30 dollars a month. Bad communist policies. I wonder why Uhuru is paying them billions. He should pay them their socialist wages or just Kenya wages. Its biz not providence

Kenya ailing from corruption... doctors charge what they want.. they run amok with unnecessary test bcoz insurance companies allow abuse of benefits where provided..."medical necessity" is NOT required to qualify tests n procedures.
Secondly, corruption in our education system has now gone full circle/cycle....the C and D students that parents hongana'd to get in courses the students were not qualified for are now the CLUELESS, rude, masters of mis-diagnosis so called doctors that play pinky-ponky with our bodies and Rx meds like we are their lab rats.... mediocrity at its best. God have mercy!

Am really happy to hear this good news!!
Watu, hii ni mambo moto, a good Doctor in any society has great multiplier effects.Health,lifespan,prosperity and quality of life are greatly boosted especially if free. Its like having extra rainfall each week for a farmer or adding an extra lane on your congested traffic or a guard dog as you sleep outdoors at night. Life becomes so much better.
I wish I was there to welcome these heroes. The govt has done well here on this one. The effects will be felt for decades. By the way, thank the Dr who was there for your delivery for if they messed up, you and your kids would be nowhere here. See that power? Go Fidel. Viva Cuba! Power to the People.