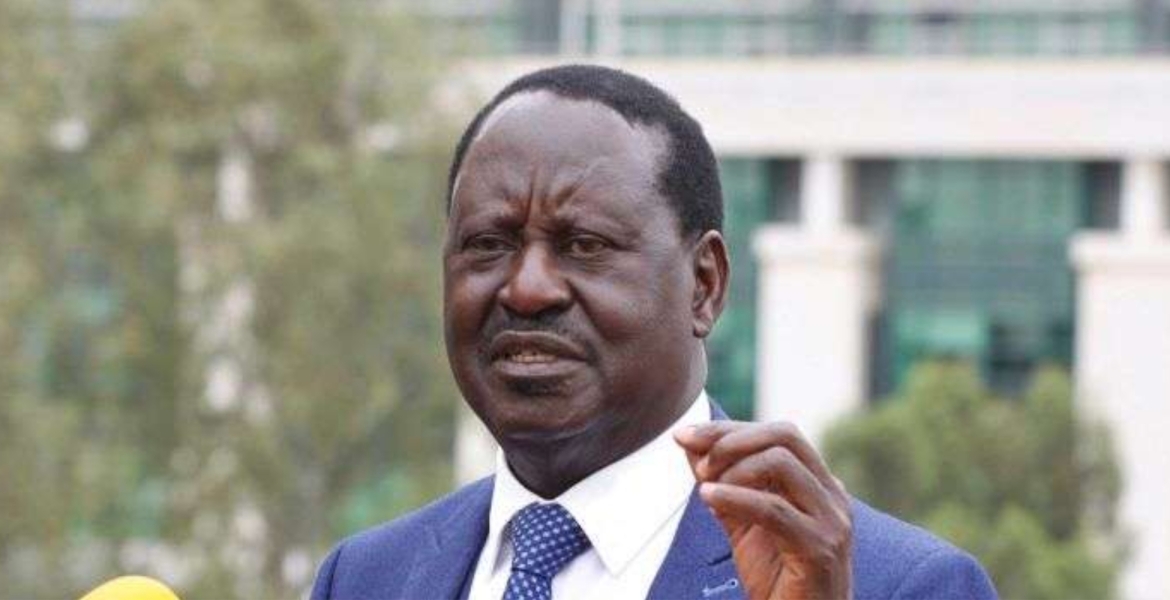 Addressing the press on Sunday, Odinga accused the government of lifting the ban on GMO foods without consulting the public and warned of its disastrous consequences.

The Azimio La Umoja One Kenya coalition party leader said the action abandons Kenyan farmers’ seeds, soils, and ecosystems for the benefit of foreigners and their businesses.

“It’s a betrayal of our country and our people. The UDA regime will subject Kenyans to unproven and dangerous foods in an attempt to please international interests,” Odinga said.

He further claimed that Ruto’s administration was acting as a puppet for foreign corporations, adding that there is no scientific study showing that GMO foods will benefit the country.

“We challenge the government to show us the study it is relying on to bring us GMO. GMO is a new form of colonialism that will leave us dependent on foreign nations,” he added.

He warned that GMOs can completely wipe out native and natural crops, leaving Kenyans dependent on seeds and foods produced by GMO multinationals.

Odinga asked Trade, Investments, and Industry Cabinet Secretary Moses Kuria to apologize to Kenyans over his remarks on GMO foods and death.

“We call upon Kuria and the UDA regime to apologize to the Kenyan people.  Officials who lack scientific literacy on such serious matters must never use their office to demean the Kenyan people as though we are a helpless, enslaved lot,” he said.

On Thursday, Moses Kuria announced government plans to allow the import of six million bags of both GMO and non-GMO maize duty-free for the next six months to mitigate the nationwide food shortage caused by the ongoing drought.

Although i don’t support GMO importation,muuaji Raila should be the last person to oppose it.As PRIME MURDERER and chairman of SGRU,the savage imported contaminated/poisonous maize from SA in 08/09 which killed and is still killing thousands in Kenya.He has been involved in population decrease of Mountainians by sale of methanol which is mixed with illegal brews instead of selling for industrial use.How come he could not solve the hunger issue for the four years he was kimuici Uhuru’s co-president?

Farmers are harvesting maize in Rift Valley now and farm produce is rotting in the farms in Kinangop. There is no need to import any food. We have enough food in Kenya.

To start with, this issue would not be our concern now if we had visionary leaders.Leaders who's priorities were to solve social problems to fruition.
We have been dogged with hunger problems for so many years.This is nothing new.And as always we run to mzungu for hand outs.Shame on us!
Since independence ,how many experts have we produced in the agricultural sector?Shouldn't they be using their brains to solve our food shortage problems?Or are they incapable?
As an opposition leader, I dont expect anything less from RAO,He should be a watchdog. However, on matters that require technocrats,and deep scientific analysis, he should trudge a carefully ,lest he misleads the masses.For example RAO fails to mention that MGO are now present in 80% of conventional food process in USA,and have been approved by 3 governmental agencies, the FDA, EPA,and the USDA.
Nobody wants to eat dangerous food,but let us avoid knee jack reaction,and do our due diligence to get the correct scientific and proven information,and make informed decisions.

GMOs are not good for the environment, neither for the human bodies...Why are we selling our souls to the devil, literally??

Too bad that this is getting politicised. Most of us have consummed GMO foods and nothing has ever happened.
Scare the people if you have a better solution for them.

So what should we feed the starving Kenyan’s? Let them die. We need to adapt with the new way. American eat GMO and many more countries. Nothing wrong with GMO food. If you are going to reject it offer a solution!!!

If we had these and some water provided to the hundreds of Tsavo animals surety they would’ve alright. Think broadly before you call food or anything else “shit” it can save.

Odhiambo, we know what happened to the GMO eating Americans. Once a Covid-19 virus visited them, it was instant death.

You are an idiot. Whats the life expectancy in AMerica and the age of those who died.Shenzi wewe.

William Ruto & NCPB are the biggest enemy of Kenyan farmers. He is always sabotaging them.

GMO idea is not born of UDA but came out of a task force put in place by Uhuru and his deputy Mr. Kitendawili.
If anybody has to take credit for the introduction of gmo should be Raila Odinga.
The Americas, Europe and Asia mostly eat GMO type foods. There’s no scientific record that anyone has ever died by eating gmo foods.
The importation of GMO foods is as result of a past failed government for which Raila was directly involved. Bbi and other nonsense took the center stage instead of focusing on food security.
Even if GMO were to kill anyone, would you rather die of hunger like a dog or face a very unlikely death many years later with dignity?
Being in opposition does not imply that we have to oppose even common sense just for the sake of staying relevant.

Raila Odinga supported GMO’s in 2011. What hypocrisy? Did it have for him to lose election to change his stand.