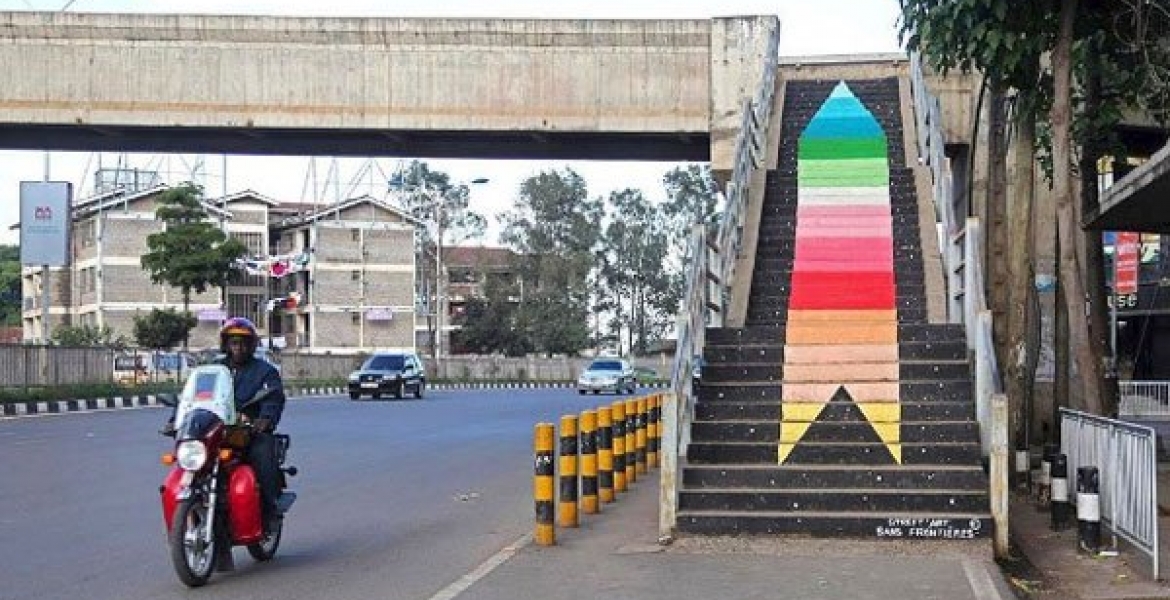 A heated online debate on homosexuality has emerged following recent paintings done in Nairobi by a group of street artists.

A section of Kenyans online have accused the artists of attempting to promote homosexuality in the country using the paintings on the walls and stairs.

The painting is drawn on the stairs leading to a footbridge near the University of Nairobi.

One of the artists behind the drawing, Naitiemu Nyanjom, describes it as a “stairway to heaven.”

However, some online users in Kenya accuse the artists of secretly promoting homosexuality through their work.

Another user says it’s wrong for the artists to do the project in a public space without "consultation."

"We're either a country of rules or we're not. These rules exist for a particular reason,” he tweets.

However, some other internet users say they find nothing wrong with the paintings.

One tweet: "Just a little color is added to brighten Nairobi and all of a sudden your little homophobic egos can't stand it.....I am tired.”

The paintings project is being done under Switch-a-Roo, a cultural exchange program between French and Kenyan artists.

Those behind the program say its aim is to take art closer to the people and create a sense of ownership in communities through painting.

Kenyan law prohibits homosexual acts, which are punishable by 14 years in jail.

A three-judge bench from Kenya's High Court is set to rule on whether to decriminalize same-sex relationships in May.

Kenyan's must reject these colors that mix colonizers with the colonized. This is a mockery to our cultures, fore fathers, beliefs and to our God.
The blacks are just waking up all over to the fact that they are the Hebrew Israelites and that the Bible is their history before it was distorted, whitened and some books like Acalypha, Maccabees, and others were removed.
What part of the ten commandments and the bible play in these new found culture of homosexuality?
On this issue Kenya and Africa are not on the same page with the French. We cannot have a sense of ownership of community by owning foreign colonizers culture that is completely contrary to our beliefs.
Some of our people may be bribed to allow such including the judges but this will only bring about what must happen. Eventually the separation of East and West and true comparison of the different nations of people, religions, beliefs and finally the God that each of those nations pray to.
God help Kenya and Africa as a whole!!

They should also put one in Medina(Kiambu). Nairobi(Mecca) and Kiambu(Medina) have become magnets for gays and lesbians in Kenya. The number of faggots in Nairobi far exceed those in San Francisco, USA, and Nairobi will soon be a place no one will be safe to bend

The West is working very hard to normalize homosexuality in Kenya and in Africa as a whole because they know the time. (According to biblical prophecies). The rulership is about to be changed by the creator from one nation to another. One rulership is coming to an end and another is beginning. Kenyan's need to listen on you tube to what is being taught by Hebrew Israelites in the streets of America, Canada and elsewhere. The black man is finally waking up around the world as to who he is. With that Kenyans will know what is happening in the world (The world of the black man) so as not to be pressured into homosexuality.
Everything is moving from religion to spirituality and Kenya does not need to be left behind.

I repeat again. History has shown the loudest castigators of homosexuals are eventually revealed many times to be closet homosexuals.

Truth be told,we have become used to all sorts of filth & immorality that exist in this planet! What we need to do is talk about how we can help these people!I've seen ladies drooling at Akothee while she does her 190 degrees split up! I've also seen young boys holding hands & pecking along the streets!Poooh!