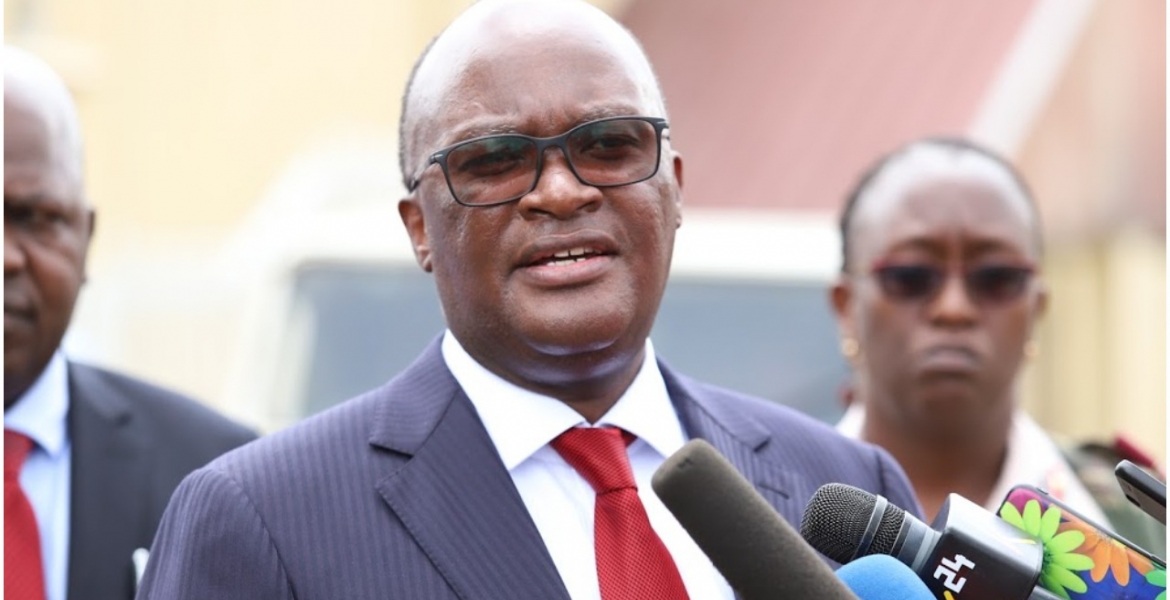 Transport and Infrastructure Cabinet Secretary James Macharia is under fire from Kenyans on social media over his latest appointments.

Macharia was heavily criticized for appointing three members of the same community to the Nairobi Metropolitan Area Transport Authority Board.

The three, Mary Waithiegeni Chege, Zacharia Karenge Mungai, and Ronald Ndirangu Ndegwa were appointed by CS Macharia through a gazette notice dated February 5th, 2021 to serve for a period of three years.

But the appointee’s ethnicity triggered protests from a section of Kenyans online, who accused CS Macharia of being a tribalist.

Homa Bay Town MP Peter Kaluma threatened to table a motion of impeachment against CS Macharia if he is not fired.

“This is stinking tribalism in a country where inclusivity is a constitutional ideal. A Minister who makes such appointments should be nowhere around public service,” said Kaluma.

Nairobi-based lawyer Donald Kipkorir said: “Have to end my over two years restraining from commenting negatively about CS Macharia. As the Minister of sprawling Transport, Infrastructure, Housing, Urban Development & Public Works, every time he makes an appointment, it has to be a Kikuyu. HE IS THE WORST TRIBALIST.”

The Nairobi Metropolitan Area Transport Authority Board was created by President Kenyatta to modernize public transport within the Nairobi metropolis.

Kenya is for all the tribes in Kenya why does Uhuru still have people like Macharia in the government he is an embarassment not only to the Gikuyu people but to the country as a whole there is so much inter tribal marriages in Kenya and for some of us we have members from 10 tribes in our family Please let us use merit in appoinments not tribe We need new blood to run our country.

Majambazi Kipkorir and Kaluma should first tell Kenyans whether NMATAB was legally created.I wonder why the two thugs chose to attack jambazi Macharia on appointment of junior officers instead of going for Uhuru on his appointment of six GiKuyus in his 22 member cabinet.I would also like to make it clear that non of GiKuyu appointed anywhere be it Uhuru or my sub location headman represent me.

Most Kikuyu people, especially the older generation, have this idea that their community is superior to the rest. In closed doors, they’ll variously describe others as Iess than them (duriri / nyamu kia ruguru etc) It is very deep rooted & very hard to get rid of in their psyche & this is why somebody like James Macharia can blatantly do this without much regard. This is despite the fact that, by far, Kikuyus followed by Kalenjins, take the gold medal when it comes to rampant thievery, corruption & plunder of the state. The first President of the country, a Kikuyu, fostered this reputation & passed it on to Moi, a fast learner who quickly taught Kales the tricks of the trade. These two communities, and especially the first one, will completely destroy Kenya in the final analysis

It's true Kikuyu's are more advanced/superior than other tribes in Kenya and indeed Africa. British people recognized that when they come to Africa and there was no Kenya then. It's in the history books!!!. So let us not deny the obvious truth. Kenya was more advance than South Korea in 1978 under the leadership of a kikuyu President but when the leadership was turned to a nomadic herdsman called Toroitich Arap Moi the country took a turn around and within twenty four years the country turned to almost a stone age country-you couldn't go to a restroom in Nairobi because there were none and those that were there were extremely filthy. Nairobi conditions were duplicated in all towns in Kenya!!!. When the herdsman was removed from the power the next president who was a Kikuyu made a turn around and in the next four years he was the sole leader the country made tremendous stride in development. We all know what happened after that and what is happening now with divided or coalition governments. Whether we like it or not the fact is Kenya is Kikuyu and Kikuyu is Kenya. I am not saying Kenya should only be ruled by Kikuyus only. What I am saying is that Kikuyu people civilization is historically more superior than other tribes in Africa and therefore a kikuyu leadership is more likely to steer Kenya's development in a more positive trend than the tribes Kikuyu people helped to civilize. I am from western Kenya myself married to a Kikuyu woman and through her my eyes have opened a lot. I stand to be corrected

@mlachake such attitudes towards others ends up hurting themselves. Case 1: God raised Moi to bring some equality and bring up others to the detriment of haters. Pride comes b4 a fall
Case 2: inability of America church to help speak against inequality saw filling the gap by leftists who want minority votes and liberals are now destroying families with demonic agenda

Central Kenya has poorest people in Kenya but their leaders make them think otherwise what a shame.

Can Kinoti/Haji tell Kenyans the conclusions of Macharia’s corruption investigations?And Kenyans should remember Macharia and Uhuru are not alone.In the nusu-mkate corrupt regime,muchawi Raila was worse with nepotism leave alone tribalism.He appointed his sister and two brother in law as diplomats in US after promising the jobs to hundreds of Kenyans in US.

Tribalism is part of our nation and it is not going anywhere. God created Africa with all those tribes. Denying tribalism is denying who we are.
It's time Africans started looking at tribalism and different languages with a positive light.
We must help develop all tribes and their languages and to make the best Kenya.
Let the Gikuyu be the best as a Gikuyu; A Kamba is best as a Kamba.
A Luo will serve Kenya best not by trying to be a Gikuyu but being the best Luo.
Tribalism is a big part of Kenya's fabric and we just need to take advantage of it, not condemn it.
Let us start uniting the country by using Kiswahili both as the national language and official language. Everything else will fall in place!!

I meant, tribes are part of Kenya; Not tibalism