Joy as Mother, Daughter and Father Reunite After 39 Years of Separation 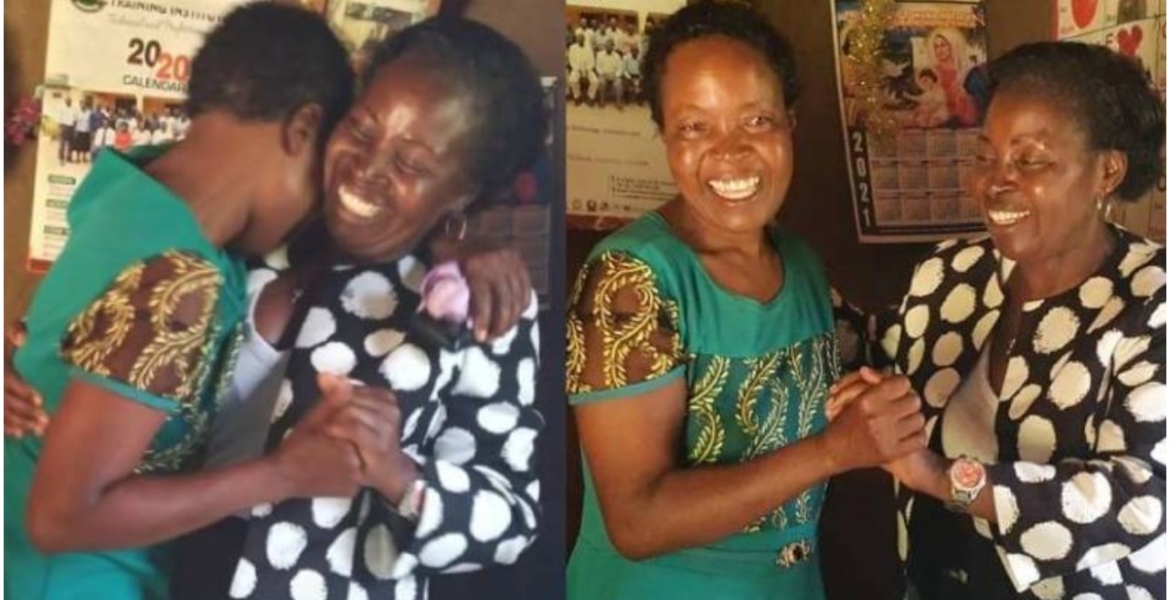 Faith Karimi and her daughter Patricia (in green)

It was joy and dance as a family reunited after being separated for 39 years.

Faith Karimi, who hails from Kangaita, Meru County, was separated from her daughter Patricia Burudi and her father Zablon Burudi in 1982.

Before their recent reunion, Faith and her daughter Patricia had spent years looking for each other in vain.

“All l knew is that the father comes from Western, but I didn’t know the exact location; which complicated my search,” Faith told The Nairobian.

Patricia, 39, said she was aware that her mother was from Central Kenya but she could not tell the place.

“I only heard rumors as my father never wanted to discuss my mother completely,” the mother of three said.

The three reunited recently following a story published by The Nairobian, where Faith appealed for help to find her daughter.

Faith met Patricia’s father Burudi in 1982 in Nanyuki. At the time, she was 16 and in Class Seven, while Burudi was 29 and worked in a local sawmill. The two started dating and Faith got pregnant, and gave birth to Patricia.

“Faith had all the beauty a man would dream of in a woman. I knew she was a pupil but… it happened,” said Burudi.

A few months later, Faith went back to school and left the baby under the care of her mother. One day, Burudi says he met Faith’s mother carrying firewood, and the baby tied on the back.

“It looked like my baby was hurting and it pained me,” he said.

He says he convinced the mother to let him take the baby and she agreed. He then employed a house help to care for the baby but one day he returned from work and found the nanny had gone and the baby left with a neighbor.

This prompted him to take six-month-old Patricia to live with his mother in Malava, Kakamega County and never returned to Nanyuki. When Faith returned from school, she was told Burudi had taken the baby to Western Kenya for some rites.

“I was told the father had picked the baby for naming and shaving as per Luhya traditions. I was not disturbed since she was with her father,” she said.

Patricia was brought up by her grandmother, and schooled at Mukhonje Primary, Mukumu Girls High, then Sang’alo Institute of Science and Technology.

Burudi says the only means of communication at the time was writing letters. “Unfortunately l didn’t have any contact from her or her relatives and it wasn’t easy finding Faith again.”

After reading Faith’s story on The Nairobian, Patricia contacted the publication to link her with her.

Faith, who is still single, traveled to Kakamega where she finally reunited with both Patricia and Burudi after 39 years. Patricia says her prayer is to see her parents together after the reunion.

“A lot has happened, but nothing stops them from being together,” she told The Nairobian.

So this man basically raped an underage girl nkt. What are the statutes of limitations. Sickening

Even though Burudi committed a crime by having sex with an underage girl, he did the right thing by stepping up to the plate after a child was born.

Say what you may...but this under- age-indulgence is mainly a walunye thing. But then, they get credit, unlike my kyuk goaties, majority of lunyes try to take care of their kids. In retrospect, I should have given in to my CRE teacher who wrote me a letter, one long holiday, asking for me to marry him...men...I was shaken, didn't even mention to anyone...not even my mum. This teacher had not even tried the old scratch-the-palm gimmick... he was mature in that - but then, I was in Form3 for heaven's sake! Once schools opened, I gave him a shoulder and a look of I know what you did last summer..and good old Mr. Matete kept his distance..hata hakuwai niuliza if I ever received his letter. Long story short, am still single like Patricia hehehe...

No you got it all wrong and something must be terribly wrong with you glorifying rape and underage sex here. Having a crush on someone as a teenager is a very normal thing, every adult has been there. It is part of growth. Those that know their limits and boundaries- end up fulfilled and successful in life its all reflected in their adult lives. But hii yako ya crush ya miaka mingi eti hadi hujaolewa. Just don't use your poor CRE teacher as a scapegoat. You may be having personal problems that you may need to confront in order to have a steady and lasting relationship with a man. Long- term relationships may not be your thing. Maybe you set your standards too high Jesus alone can reach. Maybe you went through a traumatic experience as a kid or teenager that makes you shy away from relationships. Maybe it's experiences that women close to you, your mother, sister, aunt, grandma went through that's making you hesitate to take next steps in a relationship. Maybe no man has ever sayisfied you the way you want to be satisfied. Maybe you are still confused or shy to come out as gay and that you are attracted by other women and you haven't yet accepted. Maybe you are a modern woman charting your own path, fulfilled in your career and have never created time or space in your heart and mind to be with a man. Maybe you date too many young men who have never really shown you true love. Maybe you just need divine intervention. JustMe, move on baby gal that CRE teacher is probably a grandpa by now. He spent all his youthful energy that you may have been attracted to on his wives/ wives. Maybe he even wears macho nne and teeth are falling off hjs mouth plus his skin in very loose and he has aged. He most likely needs a ka pill to amsha that Fimbo ya nyayo for one round. May be his prostates are killing him and even when he makes it to "finish" that one round it has to come out with blood. Just get your mind off that old CRE teacher of yours and live in the moment. Find you a man/a partner/ a companion/a friend whom you can enjoy youth together.