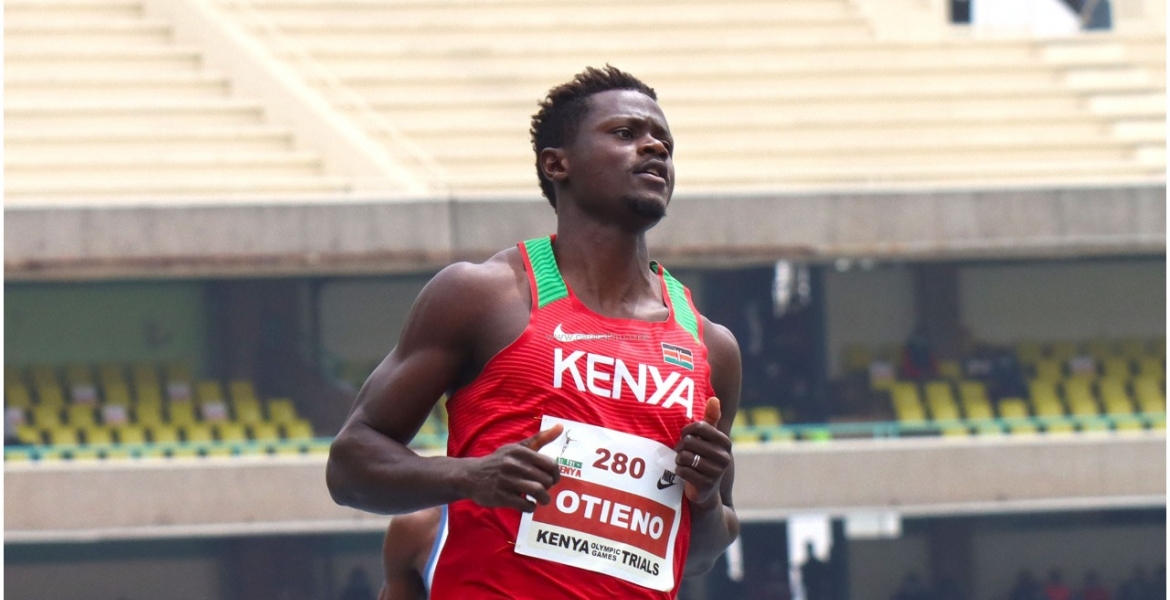 Kenyan sprinter Mark Otieno was on Saturday barred from competing in the 100m men’s heat at the 2020 Tokyo Olympics.

This is after he allegedly tested positive for a banned substance, prompting Team Kenya and the organizers to withdraw him from the race start list.

But in a statement, Otieno defended himself against doping allegations, insisting that he would never do anything that would jeopardize his career.

“We have appealed the result and decision and requested for further tests. As we honor the due process undergoing, I want to categorically state and be on record that I have never been involved in doping of any kind. My integrity as an athlete and an individual is paramount to me, and I hold in great honor the opportunity I have been given to represent my country on this global stage, as I have done many times in the past,” Otieno said in a statement posted on his Twitter handle.

He added: “As such, I would never engage in any activity that would jeopardize me or my teammates.”

Otieno further stated that representing Kenya at the Olympics is a dream he had for many years and was devastated by the setback. “I remain hopeful of clearing my name and continuing my athletics journey,” he concluded.

Meanwhile, Otieno’s fellow sprinter Ferdinand Omanyala sailed to the semis after clocking 10.01 seconds, a national record. Kenya has so far not won any medal in Tokyo.

It could be something you drank or ate. That is why when you go for global sports, stick to the main diet your body is used to.

Interestingly his comrade in 100meters Mr.Ferdinand Omanyala served suspension for two years due to doping.Lucky for him that Kenya Olympic Authorities allowed him,after vowing to never let any doper don a Kenyan uniform to represent the country.Going back on their words,they must not be serious about doping control measures to be removed from category A.
Actually, Iam not shocked that a Kenya has doped. This is not news.With corruption as rampant in the country what do you expect. As I have said before on this doping thing;you might be able to slide away in Kenya,but when you hit the international stage,you will be caught.
He claims that he would not do something that would jeopardize his teammates.Well,people do that all the time after making that declaration.How different is he from them?Not so different.
Now the bigger question,"How did he slip through the detection of AIK(Antidoping Integrity Kenya)".
He may be innocent,but I doubt.Now days the go to excuse when caught is,I ate apig steak,or some meat of acontaminated animal.Hey, unfortunately the burden of proof is on the athlete.
Those who care about sports, this is serious stuff. See what has happened to Russia.Yes when you dope, you put at risk not only yourself,but your hardworking and clean operating teammates.

Comrade Maxiley,
I agree with you.
Doping is done by alot of athletes in Kenya.
If you have watched a show on DW NEWS,doctors are MILKING it.
But what do expect, knowing that winning a race would change your life forever financially??

All athletes worldwide are on some form of enhancement programs some very complicated that they can not be detected 6 months after using.

It's all about corporations that make millions from endorsements.

Watch the documentary how Russians used these programs during Soci winter Olympics.

@ Ombote,gone are the days when man enjoyed sports for its entertainment value.Today its a big business enterprise,purely designed to bring profits/monetary gains.As such, it attracts unscrupulous individuals whose purpose is to create ways to avoid detection of prohibited substances,while reeking benefits.
Sometimes I wonder if they should just let athletes dope.It appears that the battle cannot be won as long as there is money to be made.