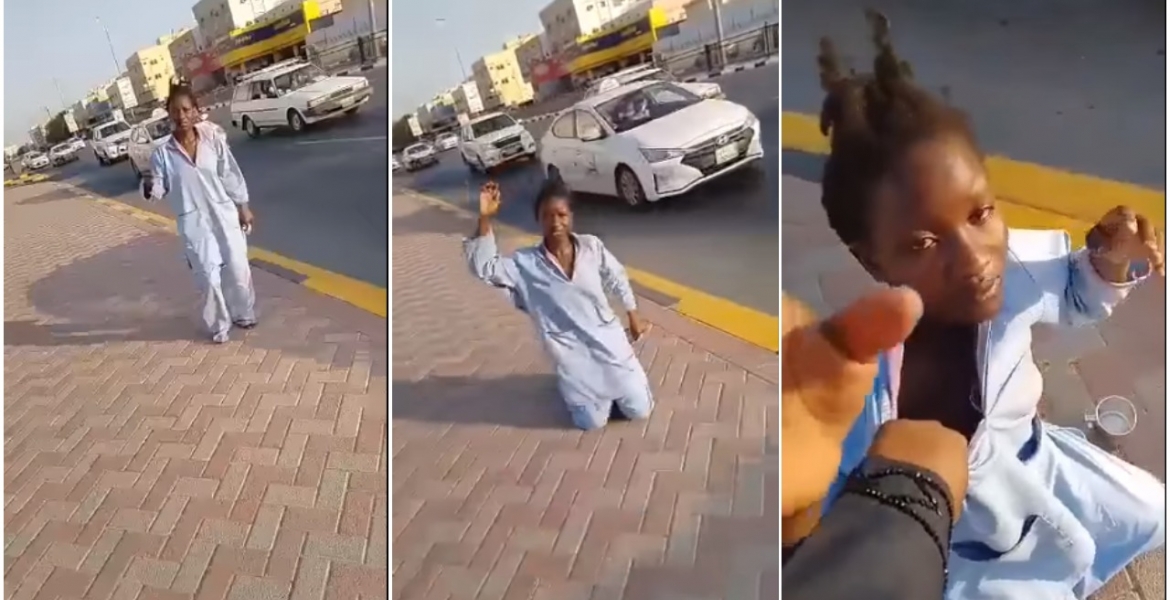 Kenyans on social media have launched a campaign demanding the repatriation of a Kenyan woman who is stranded in Saudi Arabia.

This comes after a disturbing video of the lady identified as Callista Nyamache went viral online, triggering outrage among Kenyans.

In the clip, Callista is seen walking in the streets of Saudi Arabia's capital Riyadh seemingly begging for help from well-wishers.

Shortly after, she gets down on her knees before she is captured by an Arabic woman believed to be working for a recruitment agency there.

“…She is here, she is insisting not wanting to come with me…” the Arabic woman says.

OTE-Alsherari International, the agency that facilitated her travel to Saudi Arabia, said Callista is currently being held at an office in Riyadh.

Her agent told Voice Of The Oppressed that they are working on processing Callista’s exit visa, which could take up to two weeks.

Cases of assault, mistreatment, and death of Kenyan domestic workers in Saudi Arabia have been on the rise in recent years.

The government and the Kenyan Embassy in Riyadh have often been blamed for failing to push for the protection of the rights and lives of Kenyans working there.

These Arabs want slaves not domestic workers.If they wanted workers they would have those women clad in black bui bui do their house cleaning,and other domestic work instead of sitting on their fat asses.

You can blame the Arab human trade and slavery, but don't forget that the recruitment of these women and girls happens in plain view of the Kenyan government that doesn't care about its people. How many times have we heard of such stories? Why hasn't the Kenyan government shut down trafficking rings recruiting Kenyans to go into slavery in Arab countries? Desperate Kenyans and other Africans will accept anything that promises a better tomorrow. Sadly, the Arab nations don't take any responsibilities for the abuse and enslavement of Africans. The Africa Union needs to act, and so does the Kenyan government. The handouts from Arab countries to African countries shouldn't be a sell out of our people. This needs to stop.

Being mjinga does not make you an animal. Arabs have this belief that once they pay for a worker, they own them.. which explains why they take away your pp on arrival - usihepe! Even legit workers are being mistreated, so it is not us who are screwed up, it's the Arabs who need fixing!

How do these girls end up there??? So many times these young people are being warned to not jet to the slavery that the Arab countries are...

Is there a reason this women are going to Saudi Arabia in droves? They have all heard how other women are suffering there but they still continue to travel there. I don’t get it!

Seriously when shall we us Kenyan learn .Enough is enough this Arab goons will not change .

The government should shut this
Agents .

Seriously when shall we us Kenyan learn .Enough is enough this Arab goons will not change .

The government should shut this
Agents .

I second Pauline. We blame the Arabs but really the blame and deficit is with our government. Poverty and lack of opportunities drives these girls to these money raking agencies.