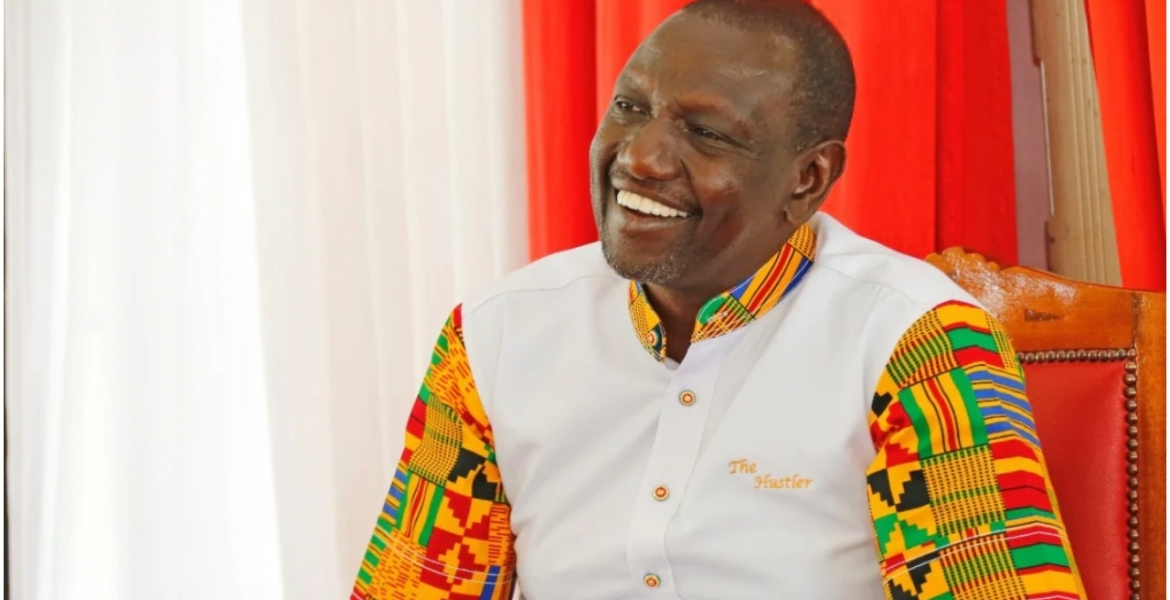 Deputy President William Ruto has intensified his 2022 presidential campaign by reaching out to Kenyans in the diaspora.

Ruto held a virtual meeting with Kenyans living and working in the US, Australia, South Africa, and the Middle East, where he laid down his plan for them and the country.

During the meeting, Ruto who is seeking to succeed President Kenyatta next year promised to create a ministry that will exclusively deal with issues affecting the diaspora community.

“It is time we had a fully dedicated ministry for diaspora just like the way we have a ministry for devolution. The ministry will be addressing all the challenges facing Kenyans in every part of the world,” Ruto said during the Sunday session.

He continued: “We recognize the critical and huge contribution—both economically and intellectually—that Kenyans in the diaspora make in the development of our country.”

Further to this, Ruto also said his administration would push for the creation of a benevolent fund to support families whose loved ones die overseas.

He also pledged to ensure that visa and passport regimes are overhauled if he becomes president.

Some Kenyans who participated in the meeting challenged Ruto to push for electoral reforms that will allow Kenyans in the diaspora to exercise their democratic right of voting.

The population of Kenyans abroad is estimated at three million, according to data by the government.

Diaspora remittances have been Kenya’s largest source of foreign income since 2015 when they overtook earnings from tea exports.

I wasn't invited either.
No one should claim to have the mandate of speaking for folks in diaspora.
Tulichaguana lini?
Officials ni nani?
Tuachisheni UJINGA.

Amen to all you have said. Well put!

Not just people; innocent & vulnerable women and young children! Quite diabolical! The victims have never received any justice to date.

Victims have never received justice because Ruto have influenced witnesses, Ruto had many witnesses killed and he is still suppressing evidence against his murderous past up to date! This man Ruto is an animal and should never be close to the leadership of Kenya!

Kiambaa issue needs to be put to rest. Men repeatedly attacked opposing camp and kept running to the church where women and children were keeping safe. The attacked camp had enough of it hence the retaliation. Facts matter.

Are you justifying the burning of children and women? So the three year old who was yanked out of her mother's hands and thrown back into the burning church had carried out attacks too? Is this not a fact?

Yes @builder could care less about those Ruto killed.

@builder may have participated in the killings too! No Kalejin will stand up to a bully because they are all bullies! One kill, they all kill! One steal, the rest will steal and it is all good. There are no adults in the house in that part of the country! Both men and women alike!

As your name says, let him build the Kiambaa church he burnt

Ruto is ready to burn more churches come 2022. I’m glad his Hague case is getting more closer look and it will help in locking him up in jail.

Who were the so-called representatives representing?I don’t need a ministry or MP.Those mafala spoke for themselves.I for one demands cutting of the bloated govt by 60% starting with scrapping of senate and all elite thugs MUST FACE THE FIRING SQUAD.Hii ingine yote badaye.

This moron killed women and children in a Kiambaa church in Eldoret and now he is reaching out to many he caused to leave Kenya for a safe haven abroad?

Ruto is a murderer, a thief, a conman and all those in the diaspora know that fact too well. He will be the worst president of Kenya. He will kill more people, steal your very thing Kenya owns and then sell Kenya for 5 pennies and then run away to Libya to live with the late Kaddafhi.

No one in the diaspora can agree to support backward wheelbarrow economics. That is the most backward way Ruto can present himself to Kenyans locally and abroad! Ruto does not what it takes to lead!

Those he say he talked to in the diaspora are liars and thieves like him. They are inclined to Ruto because they are old worn out politicians who raped resources of our country and then ran away to hide overseas! They are just looking for the second opportunity to steal more from Kenyans through Ruto.

We are tired of thieves wanting to lead those they have stolen from! Ruto is no good for Kenya!

Kenya’s money stolen from our coffers is being used by Ruto to hold virtual meeting across the world to entice the greedy monsters who cares less about Kenya just like Ruto himself.

Ruto’s quest for the top job is not tenable! He is a failed DP who cannot be trusted with the leadership of our country!

Create a ministry to exclusively deal with diaspora needs? What is the role of the Kenya embassy in Washington DC? Ruto’s shiny teeth are obviously lying to every body!

How come Ruto who has been in politics since age 2 years have not done what he is now promising? Wacha upuzi Ruto.

The Kenya Embassy is not there to serve you. They are there to come in and chat, take a tea break, not answer phones, take another tea break, shuffle some papers, eat lunch and then close after lunch to shuffle more papers drink more tea and leave after 3 hours of that nonsense. In all seriousness I don't see how saddling the Kenya taxpayer with more debt helps. I can't imagine Ruto, who had people burned alive, wielding power without fear of consequences.

This is the first I can give you some hands 🙌 up for speaking like a man! Your jokes aside, what you said in the first paragraph is categorically true! That embassy in DC should be closed down to same our tax money!

Ruto talked to the former Rarieda MP Shem Ochuonda and he is lying he spoke to Kenyans. Stop selling Kenyans short DP Ruto.

Kenyans do not owe you anything! You are the worst politician alive today! We do not need you for a president! You are not mature enough to handle the job position of the presidency. You are a failed DP!

Please Ruto! Please! We will not let you steal the monetary contributions we make to kenya. Go away you liar!

I thought this guy is the Deputy President. Why Cant he start Now. Nothing is Stopping him from holding meetings with the Ministry of immigration and do the neccessary reforms or even the ministry of foreign affairs. Who told him our Needs are burials to loved ones, NHIF or NSSF. Some of as just need need quick services like renewing a passport or ID. But not burials. Did he really speak to people from abroad or people from Nyanza or Western Kenya ( Local abroad).

Precisely @peter! He is the DP but all he does is whin like a kid seeking for sympathy card! Why not start the things he is promising now? Ruto ni kubafu, mafi ya Kuku, and bure kabisa!

He spoke to those in Mongotio, marakweti, and Iten! That is Ruto’s diaspora! That is his foreign countries! Those are the dummies who will vote for Stone Age wheelbarrow economy of humped cows.

We need dispora issues taken seriously. This will be the 1st President to do so. IEBC should fund diaspora campaigns outside the country. Provide edu loan and grants to students outside Kenya. Add diaspora to affirmative action list. Get a support system active for diaspora folk.

Please do not be silly @builder! Your ignorance is beyond your smelly goat nose! We don’t need a murderer to address diaspora issues! He is deceiving you because you are stupid!

I have no space time 4 insults.

Stop selling our country short supporting a mad creature! Ruto has no shame and so do you!

There is no one in the diaspora or Kenya feels comfortable with this satanic worshiper @ruto being the president of Kenya! He is a ICC material and a Hague convict!

This guy will be president at some point. That’s a fact we should all face. I don’t support him but he has enough support in Kenya to elect him. Kenyan voters are extremely gullible, they will vote for you if you put several hundred shillings in their pocket. Ruto will buy all the votes he needs to secure the president seat.
He’s been campaigning since becoming dp. Someone please tell me one thing he’s accomplished since taking office.

He's destined to be president. He's got the money, eloquence, experience, wide support, hustler tag, king maker resume, energy etc. Call him names at your own waste of digital ink.

He got our stollen money that is for sure! However our job is to make sure he does not steal again by denying him votes and making sure he takes responsibility of Kenyans he has killed.

Wow, your sentiments about DP Ruto are widely shared by 99% of Kenyans! The material man Ruto is not fit to lead Kenya! Let truth be told!

He is “destined” by who? So you think a man with stolen money should be in charge of that country’s Bank? Please, folks like you are a pure shame to Kenya.

Ruto is a very dangerous man! Everything he has done in past 25 years in politics disqualifies him from being the next president. He is corrupt, he has accused of killing people, he is mentally unstable like Hitler of Germany was, and he is very insecure about himself. Not a president material!

The central Kenya residents surely should feel that insulted for Ruto picking up known thieves as his DP should he elected!

Everyone in central Kenya know Rigathi, kindiki, and Kiunjuri have stolen from the People and they are all failed politicians! Let Ruto not lead central Kenya residents to help by picking his thiefing friends to represent us!

Ruto is not mentally fit to be president of any country in this world!