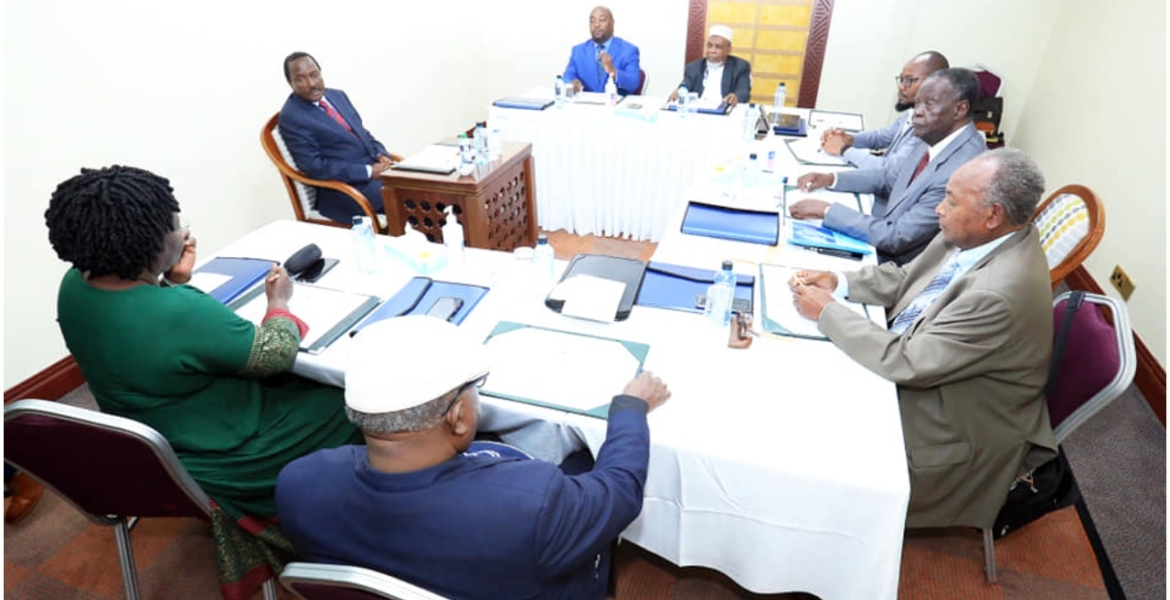 Musyoka had earlier vowed to boycott the exercise, insisting that he was the coalition’s undisputed running mate candidate and appearing before the seven-member panel would be “demeaning to my person.”

"I want to tell all Kenyans that I will not attend the said process. I find the entire thing demeaning to my person and will therefore distance myself from it," he was quoted as saying.

Speaking after the session on Tuesday, Musyoka defended his decision to face the panel, saying he did it out of respect for its members, who include eminent persons.

“The decision to come was my decision because I realized that we didn’t want to give anyone an excuse whatsoever to say that I refused to come, so I am here. And if you look at the eminent persons and even the Bishops here, how could I have missed,” Musyoka told reporters.

Moi, who is the chairman of Kanu party, withdrew from the race and endorsed Musyoka.

The panel is expected to conclude the vetting exercise on Tuesday and forward three names to Odinga, who will then name his running mate ahead of the May 16th deadline set by Independent Electoral and Boundaries Commission (IEBC).

Please do not select this loser to be Raila’s DP. He will be one of the most useless DPs in the history of Kenya. He is a very greedy man and he does not care about the people. He has some mental and psycho issues that need to be attended to by a doctor. Kalonzo is unfit to be a kenya DP.

As usual. Given that the other tribesman has jump-shipped & made it official, can't help waiting to see how the numbers will show who's the region's spokesman.

What do you expect? Kalonzo is a true watermelon

I really do not know why kamba people follow Kalonzo around like he is a gift from above. His indecisiveness makes the kamba people look bad. But it’s now not surprising as we can honestly lump up Mutua in the same boat with kalonzo. Mutua just declared that he is the watermelon jr.

Watermelon he is….. very rotten indeed. Does kalonzo really consider himself a material for leadership??

🤣🤣☝️🤣🤣ofcourse he said he is the stupid dad/father/husband in 2022.He said it himself on the media.To be have principles is good in life.

None of those aspiring to be president or VP have anything to offer Kenyans.All of them,kina muuaji Raila,jambazi Ruto etc just want another chance to loot.But I wish I met the four women who want to be VP.I would ask Wangari how she would feel electing an Adulterous VP with a history of enjoying sex in woods of Njonjo/KIA/Kabete Approved border junction.I would also like to know whether Kaluki would like a VP who cheats on her husband with a journalist inside her official Mec.at Parkland Sports Club parking bay.Wanjiru knows it’s only a ten minutes walk from HARRAMBEE HOUSE to KARUMAINDO/SABINA JOY.I would ask Mumbi whether she can elect a person who left her husband at their honeymoon bed to taste god muchawi’s asali-Ati to be forgiven for looting shs 800m. za hungry billionaires.

Kalonzo knows his worth. Azimio will zimika without him. He's needed by either side for 50pc plus 1