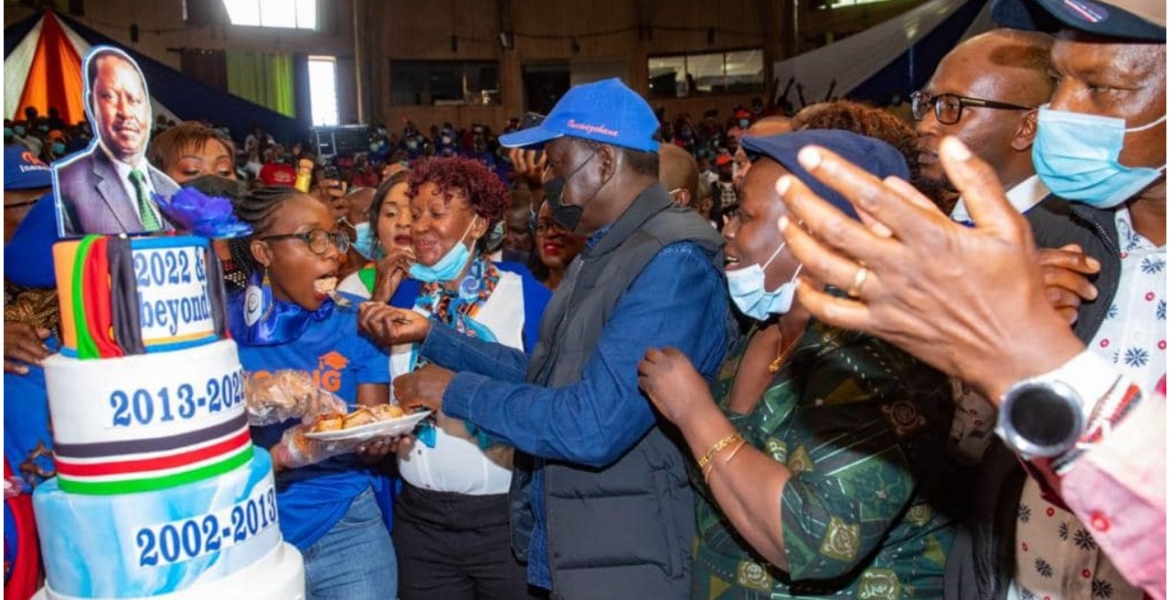 Through his social media pages, Ruto wrote: “Happy birthday Jakom. May you be blessed with many more.”

Gatundu South MP Moses Kuria said: “Hate him or love him, irrespective of how the last chapter of his political book ends, this man’s place in the history of this nation is carved in stone. No other living Kenyan has gone through what he has undergone for the sake of our current freedoms. On behalf of the real hustlers of this nation, Happy 77th my friend his Earthquakeness Baba Jakom.”

Mombasa Governor Hassan Joho wrote: “In this journey of life, you have stood out with distinction as man of honor and who has always fought gallantly for a prosperous and inclusive nation. As you start a new chapter in life let the annals of history record you not only as a global leader and a hero but also as a father of this nation.”

Kakamega Governor Wycliffe Oparanya’s birthday message to Raila reads; “Happy Birthday the Fifth; Rt Hon @RailaOdinga You are a wonderful leader, mentor, and role model. On your Birthday, I wish you all the best and success in all your endeavors and bid to be the Fifth President.”

Raila, who served as Kenya’s Prime Minister from 2008 to 2013, held his birthday party at Bomas of Kenya in Nairobi, where he shared a cake with a group of youths. The party was organized by the Azimio la Umoja Youth.

“I loved shaking a leg with the young guys and girls at Bomas. We shared some great laughs, put our best feet forward, and reflected as we celebrated my birthday. Thank you all for the warm birthday wishes,” Raila said via Facebook.

On December 10th last year, Odinga declared he will give his fifth stab at the presidency in this year’s election.

There we go! My man my president William Samoei Ruto! Let’s go brandon😄

Baba is a selfish self seeker. When he fights , he does it for his needs not for the common me and you. For example, when Baba is out of government, we hear him complaining or trying to fix something in government. But when he is in government like right now, you cannot hear him fighting. Even when we all can see the wrongs in government. As long as Baba is eating, he is out of the opposition party.