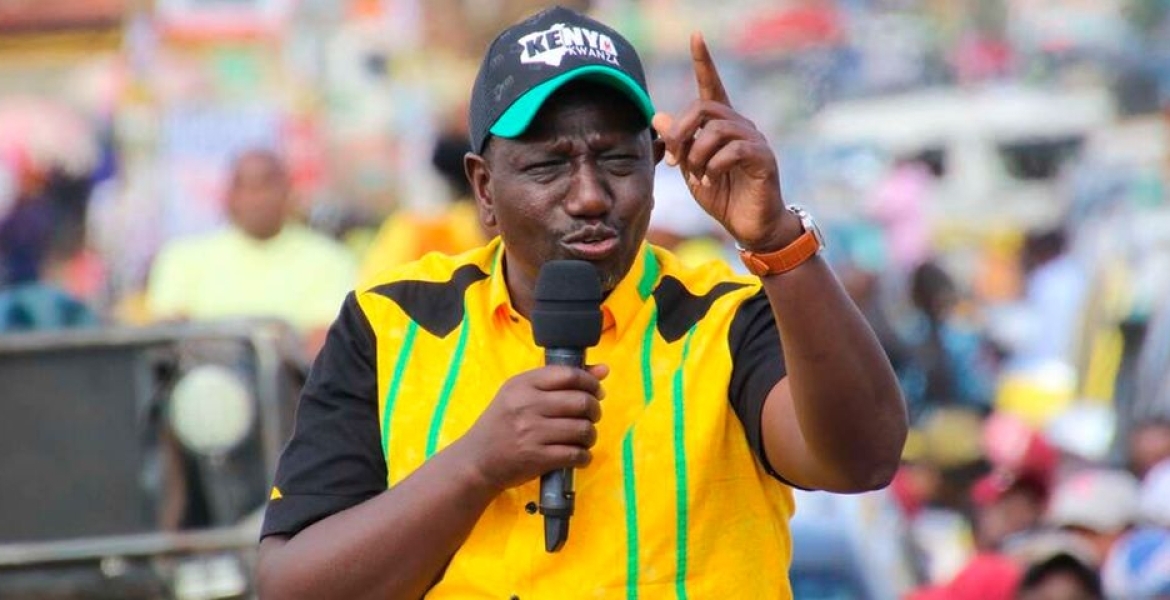 Deputy President William Ruto has hailed President Kenyatta’s announcement that he will hand over power to whoever wins the presidency in the August 9th general elections.

Speaking at a campaign rally in Baringo County on Monday, Ruto pointed out that the commitment by the president has effectively ironed out their long-standing differences.

"Bwana rais, we had a problem with you when you were saying that you cannot hand over to William Ruto, now that you have accepted that whoever the people choose you'll hand over to them, we are together," said Ruto.

Ruto, who is eyeing the presidency on a UDA party ticket, also exuded confidence that he will trounce his main challenger Raila Odinga of the Azimio La Umoja-One Kenya coalition in the forthcoming elections.

"You also said that the one who will be defeated you will go home with them. Utatusaidida yule mtu asing'oe reli na asilete fujo. Muende nyumbani na yeye huyo mtu wa kitendawili," he added.

The deputy president was referring to President Kenyatta's speech during the official commissioning of the Nairobi Expressway on Sunday where he reiterated his commitment to hand over power to the winning candidate.

Ruto further assured Kenyans that there will be peace across the country during the election period, and urged his supporters to reject attempts to incite them.

"I want to tell all the people in Kenya. There will be no conflict in this country. And I want to ask every Kenyan not to accept the incitement that is going on. People will vote for who they want and how they want. Even if they are voting for my competitor, we will support the citizens to do so because we are democrats and we believe in democratic free will of the people to make their own choices," he added.

No more “No Rail No Rail” bullshìt!!!

Ruto - please know and understand that you are not the people’s choice! A president has to be settled and mentally structured. Ruto lacks these two important qualities.

A lot of Kenyans would have a lot problems if power was to be handed over to WSR. Kenyans will know then that the country is no longer at ease!

Pearsonally I shall have a lot of problems if Raila gets into power.
After the last elections he went to my town an said Kikuyu's must leave and go back to where they came from.
Luckily he had just lost elections.
During the 2008 chaos which were caused by No Raila No Peace, my neighbour's tenants in my Kikuyu village burned down his entire rental estate.
I fear now if he wins, my tenants may want to celebrate by doing the same to me.

Ruto is possessed with Uhuru. He has to respond on everything Uhuru says. Ruto’s level of intelligent is below par.

It has to be a strategy that has worked like a charm. Uhuru is living rent-free in his head. Reminds me of Trump’s obsession with Obama

Ruto wants to hand over Kenya to 9ja...he has a huge backing from 9ja billionaires .Kenyan be worry we have enjoyed a stable relatively strong currency in the region for decates...lets not go the naira way..your vote will stop this.